Lawmakers have explained the reason President Muhammadu Buhari was openly booed during the presentation of the 2019 appropriation bill.

The president proposed an N8.83 trillion 2019 budget to a joint session of the National Assembly in Abuja on Wednesday, December 19, 2018.

Many lawmakers were heard openly booing the president while he delivered his opening speech about the achievements of his administration.

There were shouts of disapproval when the president said the nation’s economy and security have improved under his administration.

“May I appeal to the honourable members that the world is watching us and we’re supposed to be above this,” President Buhari cautioned before he continued to more jeers. 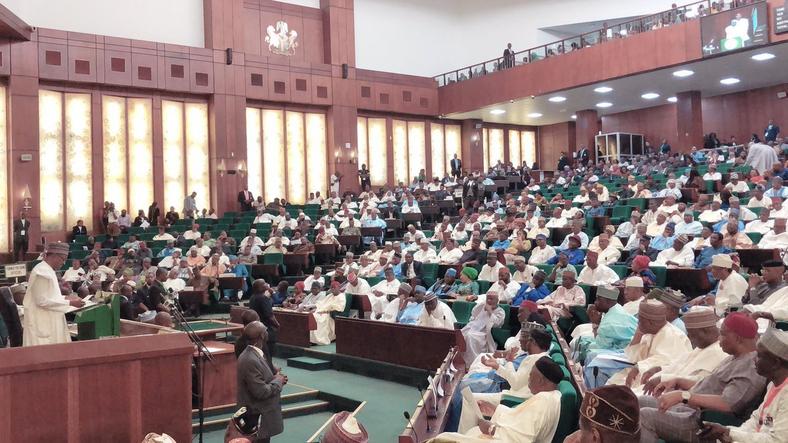 President Muhammadu Buhari presents the 2019 budget to a joint session of the National Assembly on December 19, 2018 (Twitter/@BashirAhmaad)

Some pro-Buhari lawmakers in the All Progressives Congress (APC) attempted to drown out the jeers by applauding the president during the presentation.

While the action of the lawmakers has divided opinions across the nation, one of the protesting members, Kingsley Chinda (Rivers – PDP), said it was fueled by the current administration’s ‘insincerity’ on budgets.

“The presidency has not been fair to Nigerians when it comes to budget and most often they use that to blame the legislature. One example is, when it comes to capital releases, you will find out that they have performed very poorly,” he said.

The Deputy Minority Leader, Chukwuka Onyema (Anambra – PDP), also addressed the media to disclose that the president was booed because his administration has lacked vision in the management of Nigeria’s economy.

While reading from a prepared speech, he said the current administration has only engaged in ‘lies, blames and propaganda’ while the nation suffers from lack of quality leadership.

He said, “For a government that came into power promising utopia, consistently dismal implementation of the national budget betrays its half-hearted insensitivity to the plight of the Nigerian people who long for genuine progress and development that will positively impact their lives.

“Yet since 2015, it has been an unfortunate harvest of lies, blames and propaganda while its over hyped campaign promises of security, economic growth and war against corruption have remained a mirage.”

Despite the fact that some of the anti-Buhari lawmakers also displayed some prepared placards in protest against the president, Chinda said that it was largely spontaneous.

“The protest was not planned, it was spontaneous. This morning, people just felt there was a need for it,” he said.

He also disclosed that some of the APC lawmakers were in support but could not openly antagonise the president during the presentation.

Before the president made his entrance into the lower chamber of the National Assembly on Wednesday, two members of the House of Representatives, Bashir Babale and Duoye Diri, were engaged in a physical confrontation.

A few other lawmakers were also involved in heated debates shortly before the president’s arrival. When he entered the chamber, some opposition lawmakers sang in protest while APC lawmakers chanted “Sai Baba”.

At the end of his presentation on Wednesday, APC lawmakers kept chanting “Sai Baba”, “Four more years” to drown out the protest songs being chanted by opposition lawmakers.

The rowdiness of the lawmakers prevented House Speaker, Yakubu Dogara, and Senate President, Bukola Saraki, from making closing remarks and the session was brought to an abrupt end.

We want to hear from you all.

Buhari Nominates Emefiele for Another Term